La Rioja in Argentina had also argued that confusion was unlikely since in Spain, the Tempranillo black grape is the most commonly used in Rioja wines while in Argentina, it is the white Torrontes grape. Javier Tineo, Minister of Production for La Rioja Argentina, said: "If we look at history, the mess is the fault of the Spaniards, who took the name to the province. And it was they who brought us the wine tradition. La Rioja in Spain produces around million litres of wine annually, of which 85 per cent is red, from 14, vineyards. Jose Luis Lapuente, secretary general of the Rioja Regulatory Council in Spain, said that the body could still appeal the verdict and would continue to apply diplomatic pressure over the issue.

He claimed market research suggests that "nearly 60 per cent of consumers identify wines of La Rioja Argentina with those of Rioja. In the colonial power ordered that all the olive trees in La Rioja province, Argentina, should be cut down to stop them competing commercially against those from Spain. But one woman hid a sprig from an olive tree in a bowl, which led to the production of Argentina's Arauco variety of olives. The naming of wines has also caused tensions between many countries over the years, most notably with France's bid to legally protect the term champagne which although now generally adhered to was often flouted in the past.

Moving to Spain. You learn something new every day…. Thanks for sharing. Matthew Hirtes July 3, pm. We had been looking forward to this lunch for quite some time and started off by showing our tourist-strips and ordering two espressos before the meal. Our waitress gave us a look of utter disbelief and then erupted in laughter!

But we thanked her profusely for this pre-lunch pick me up and jumped into a meal to remember! We ordered a bottle of Campillo Reserva to kick things off and it was an excellent accompaniment to the multiple courses we experienced, courtesy of the tasting menu.

We began with a bowl of local green olives. They were salty, tender and pure. It was fun to sample the foie gras with each flavor garnish and it proved to be a playful and satisfying appetizer course. To my delight, our next course brought the return of a familiar friend, salmon roe! Sitting atop delicate anchovy filets, the base of this artful disc was made up of caramelized onions and zucchini.

It was slightly sweet with a touch of brine from the fish. I loved the presentation with the strategically scattered herbs on the slate plate. Next up: shrimp with charred baby artichokes set over a thinly constructed cream sauce which married everything together. It was a very happy union! 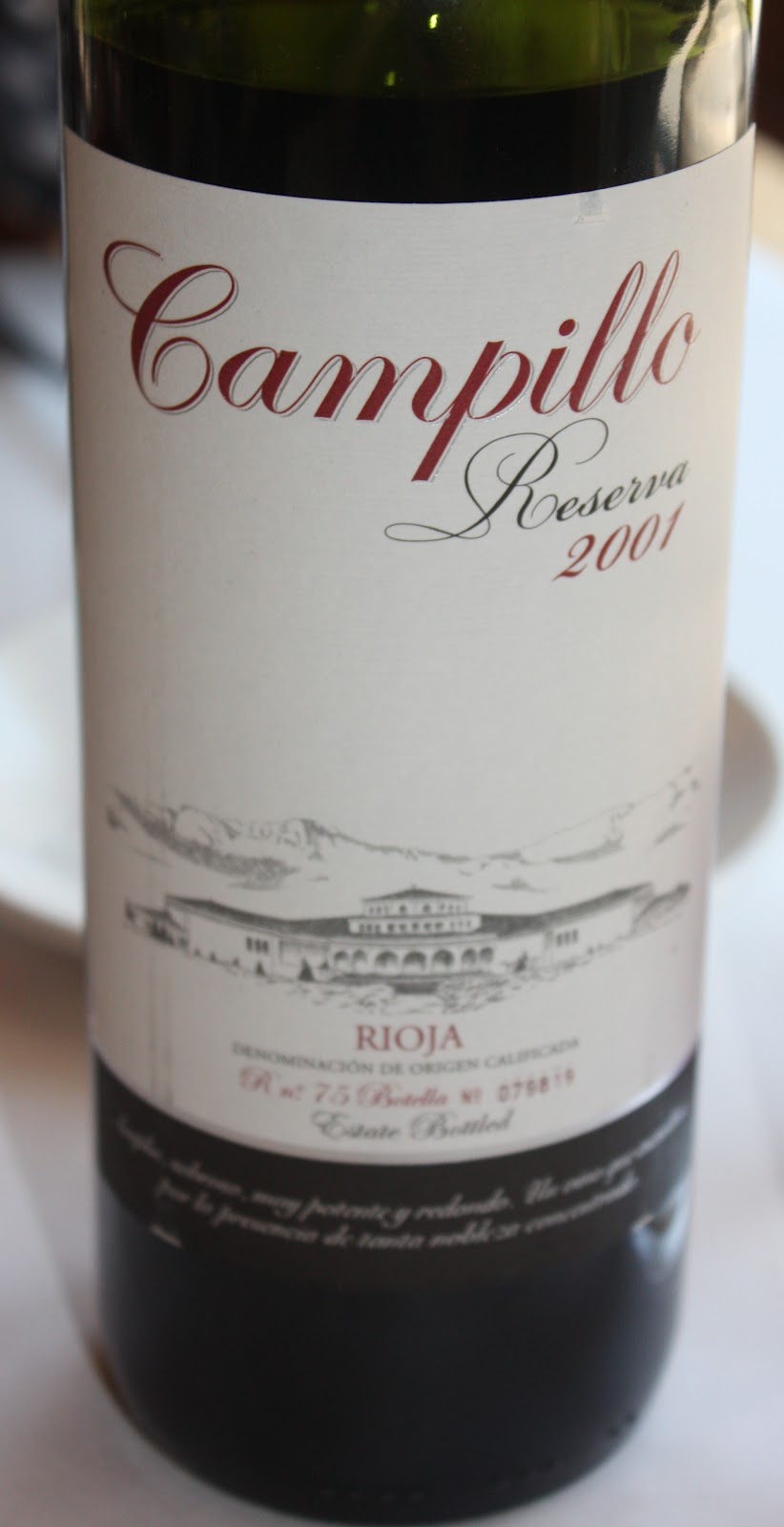 We were then presented with my favorite course of the day — bacalao wrapped with leek and topped with mussel. How gorgeous is that plate? Bacalao is the staple fish of Rioja and is flaky and delicate. The thick ribbon of leek kept all of the juices encased and provided the perfect coat for an extremely moist and flavorful fish.

I hated to break the seal of the leek, releasing the fish and allowing the sauce to integrate the ingredients, a once perfectly arranged plate now in disarray. But my fork made a timid nudge at the top and everything fell together, rewarding me with the most delicious fish we would find in Rioja.

Our final course, to cap off the main portion of the meal, was a layered dish made up of seared foie gras and braised beef cheek. Rich and powerful, I found this dish to be wholesome and soul-filling. It was also my favorite bite of foie gras on the trip, which is saying a lot as it is hard NOT to find foie gras on a menu in Rioja. Like the potatoes and chorizo, it seems to be a pantry staple in this part of the world. But of course — dessert! Our tasting menu would not have been complete without these sweet confections offered up for sample.

I managed to find a little extra room and especially enjoyed the lemon ice cream and raspberry cheesecake. I felt completely relaxed. Our batteries sufficiently recharged, we headed out to see what Laguardia is like on a Friday night. We grabbed a table in the main square and placed an order for cava and beer. It was hard to adjust to but we wanted to live in the reality of this world as much as possible.

So we got comfortable, ordered a second round, and watched the indelible people of Laguardia go by. I could people-watch all day in this town. It was a close-knit group and it was a delight to be in their presence. What I enjoyed most of all were the men of Laguardia. Aged 50 and up, they seemed to travel in packs, soldiers dressed in a uniform of soft soccer shoes, jeans and checkered shirts. Never breaking five-foot-six, they marched from bar to bar, their bellies leading the way, swelling slowly as they filled with crianza.


The Euro tournament was in full swing and patriotic loyalties with nightly traditions had to be adhered to. Z and I had found a favorite spot — Bar Velar — and made a visit all four nights of our stay. Saturday morning came and we had a clear calendar — not one thing to do but enjoy our last day in Laguardia. We set up camp at a small bar for the morning and read for a while. We also made sure to elicit laughter from the waitress as we requested two espressos and two glasses of cava.

Sparking in the morning is almost mandatory on vacation, right? It is in my book, at least! We already felt like we knew it well. As it turned out, there was a whole other part of Laguardia that we had yet to explore. We had not descended into the underground chambers that wove themselves through the earth, forming a cobweb of passages beneath the streets of Laguardia.

Built at the same time as the town itself, this map of caves was intended as a place to hide in the case of intrusion or attack. As times became more peaceful, they were used as storage and, as the wine trade developed, they soon realized they had inadvertently created the ideal setting for aging wine.

There are four wineries who still produce and store their wines within the walls. One he was honored to keep alive. Laguardia above land is beautiful.

Laguardia below ground is fascinating! Massive stone blocks lined pockets of space that had been carved out of the earth. We were encouraged to climb up a rickety ladder and remove the wooden cover topping one of the vats. Much to my shock, these vats were storing precious wine, all at various stages of the aging process! We later sampled some straight from the vats, a batch that was yet to hit the barrel or the bottle.

We bought a few bottles to enjoy at home and another to continue the moment. We headed to a small park that overlooks the land and sipped our wine, taking cat-naps on a blanket in the grass. It was the perfect way to spend our last afternoon in Rioja. One final touch of magic awaited us as we made our way home, late afternoon, after our extended wine-picnic.

The clouds were cresting against the hillside and plummeting over the ledge.